Thoughts on these recipes

I have kept the original spelling and verbiage that were in the document when retyping the recipes.  The date of the document is presented directly under the recipe title.  When available, links to the full documents (which often contain more recipes) are provided at the bottom of each recipe.  Enjoy!

Recipes on this page (and year):

The simplest method of making currant jelly is perhaps the following:  Free the currants from leaves and large stems.  Put them in the preserving kettle; crush a few with a wooden vegetable masher or spoon; heat slowly, stirring frequently.

When the currants are hot, crush them with the vegetable masher.  Put a hair sieve or strainer over a large bowl; over this spread a double  square of cheese cloth.  Turn the crushed fruit and juice into the cheese cloth, and let it drain as long as it drips, but do not use pressure.  To hasten the process take the corners of the straining cloth firmly in the hands and lift from the sieve; move the contents by raising one side of the cloth and then the other.  After this put the cloth over another bowl.  Twist the ends together and press out as much juice as possible.  This juice may be used to make a second quality of jelly.

The clear juice may be made into jelly at once, or it may be strained through a flannel bag.  In any case, the method of making the jelly is the same.

Measure the juice, and put it in a clean preserving kettle.  For every pint of juice add a pint of granulated sugar.

Stir until the sugar is dissolved, then place over the fire; watch closely, and when it boils up draw it back and skim; put over the fire again, and boil and skim once more; boil and skim a third time; then pour into hot glasses taken from the pan of water on the stove and set on a board.  Place the board near a sunny window in a room where there is no dust.  It is a great protection and advantage to have sheets of glass to lay on top of the tumblers.  As soon as the jelly jis set cover by on of the three methods given.  (see p. 29) [use link below]

To see the entire publication (and more recipes), use this link:  Canned Fruit, Preserves, and Jellies: Household Methods of Preparation

To secure satisfactory preserves, it is essential that the pears be properly ripened.  The unripened fruit gives a product that is lacking in flavor, is tough, and is otherwise undesirable in texture.  Fruit ripened to give a pressure test of 3 to 4 pounds or at the stage of ripeness that is best for eating fresh is satisfactory.

The fruit should be peeled and cored as for canning.  The coring should be carefully done so as to remove the areas near the core which contain conspicuous clusters of stone cells, but with as little additional tissue as possible.  After it is peeled, the fruit should be handled promptly to keep the tissues from browning.  If it is to be held for more than a few minutes, it should be covered with ice water or a 1 percent salt solution.

It is generally best to slice the fruit into eight radial segments, although quarters or sixteenths may be used.  Because the sugar penetrates into the fruit somewhat slowly, slicing into halves is not recommended.

The proportion of fruit to sugar is of considerable importance.  The tartness, consistency, and flavor are greatly influenced by the amount of added sugar.  A mixture of 55 percent of fruit and 45 percent of sugar appears to be about right for most people.  The Kieffer pear is rather low in acid, and the tartness of the finished product is increased by increasing the proportion of fruit in the mixture.  The fruit is also somewhat low in pectin, and the consistency of the product is improved by increasing the amount of fruit.  A proportion of 50 percent of fruit and 50 percent of sugar may be used, but the product is not quite acid enough and is somewhat sirupy in character.  The sugar and fruit may be mixed before the material is heated.  When the sugar is added, it immediately extracts water from the fruit, which may be sufficient in amount to permit boiling without the addition of water.  However, as this tends to cause considerable shrinkage it may be advisable to add a little water and to heat the fruit slowly to the boiling point.  The sugar is then added slowly and the fruit is constantly stirred.  This method tends to lessen the shrinkage, and consequently to minimize the resulting increase in toughness.

In order to obtain the desired quality and consistency it is necessary to concentrate the material by heating it either in a vacuum or in the open air.  A somewhat better product is obtained by carrying out the evaporation under reduced atmospheric pressure.  Undesirable flavors are not so likely to be developed, and the delicate flavors of the fruit are better preserved.  However, the concentration of the material may be satisfactorily carried out in an open kettle.  It is advisable to apply the heat uniformly over the bottom of the kettle to prevent scorching.  The boiling should be as rapid as is possible without scorching the material or causing it to overflow the sides of the kettle.  It is generally better to cook the fruit in small quantities and to finish quickly,  especially if the use of large quantities necessitates a longer cooking time.  The longer the material is heated the more pronounced is the alteration in flavor.  In home preserving it is generally advantageous to provide a kettle or evaporating pan of sufficient size so the material will not fill it more than 3 or 4 inches deep.

The factor that very largely determines the amount of evaporation is the consistency of the finished product.  The consistency most desirable is one in which the sirup surrounding the fruit is thick enough to be conveniently spread upon bread.  Preserves of proper consistency have 65 to 70 percent of solids and are generally obtained by evaporating water to the amount of 23 to 26 percent of the total weight of sugar and fruit combined or by boiling the material until the temperature rises to 224° to 226° F.

When the material has finished boiling it should be placed in sterilized containers of suitable size and sealed.  If the containers are filled while still very hot, it is generally not necessary to heat further to prevent the growth of organisms unless the head space is excessively large.

To see the entire publication (and more recipes), use this link: Handling and Preparing the Kieffer Pear for use as Food

To prepare juice: Sort and wash fully ripe plums and cut in pieces; do not peel or pit.  Crush fruit, add water, cover, and bring to boil on high heat. Reduce heat and simmer for 10 minutes.  Extract juice (p. 6)

To make jelly: Measure juice into a kettle.  Add pectin and stir well. Place on high heat and, stirring constantly, bring quickly to a full rolling boil that cannot be stirred down.

To see the entire publication (and more recipes), use this link:  How to Make Jellies, Jams, and Preserves at Home 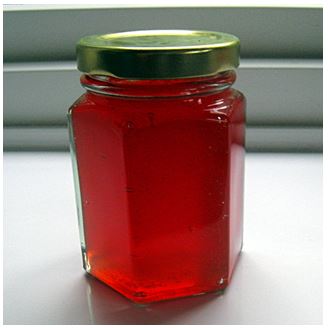